I have always been interested in words as ways to change the world; for their pragmatic use— interested in speech as action itself. Business executives’ words can be actions, and the actions of today’s business leaders matter to capitalism (improving it or making it worse).

What do I mean when I say executives’ words can actually be actions, beyond words? I’ll explain.

Most of the time, we just talk:

Declarative statements like these constitute much of our speech all day long—we’re just saying stuff, making observations—in short, communicating.

Now, let’s say it’s April in Sacramento, and you’re sitting in a drafty meeting room. The windows are slightly open:

You are doing more than merely making an observation—just talking—because you know that, chances are, someone will get up and close a window. With your words, you have contributed to a changed state of the world—the room may now be warmer.

New setting—you’re at a dinner party in Greenwich Village, and you have a terrific plate of Brussels sprouts in front of you, but you’d like to spice them up:

As is common practice, a listener passes you the salt. You have requested a changed state, and you have received one.

We perform other types of speech less frequently in our everyday speech. Let’s take these examples:

In these examples, the words you use are the actions. They do not create a changed state of the world, like “Can you pass the salt,” but they do, with their utterance, accomplish the task. When you say, “I apologize,” you have, in fact, apologized. When you say, “I invite you,” you have performed the act of inviting someone. No physical action is necessary.

Now, let’s consider these, to me, ultimate examples of speech acts:

Many people don’t realize that speech can span a spectrum of action. It can be strictly communication and observation, it can request, require, or cause an action, it can be an action, and it can create a changed state in the world.

You’ll notice that in the final set of examples, the person making the utterance was someone in power, someone highly trained and with credentials—a referee, a minister, a military general. However, even an uncredentialed speaker can change the outward state of the world with an utterance:

Yelling this word in the context of a crowded theater creates a changed state in which people get up and run around, trying to find the exits. The speaker has created a changed state of the world with the context of her words. Context—not power or credibility—often is the way that the unvoiced and disenfranchised commit speech acts. Although these people have little power or credibility, the context (culture) enables them to commit speech acts. I love that. 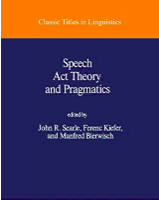 Executives at companies have the same type of word power as the minister and commander in Example 5 above. Executives’ words can actually change the business world, and they do. Through my role of ghostwriting speeches, which I have done since 2003, I see the changes their words create. In delivering a speech, an executive performs an action with her words. The executive’s mix of speech acts is different from a layperson’s mix of speech acts. The executive is rarely just saying, “The grass is green.” (Just ask retired SEC Chairman Alan Greenspan about his casual observation that stock market participants might be displaying “irrational exuberance.”)

More likely, business executives are in the Example-2 scenario (“Brrr, it’s cold in here”). Maybe an employee or competitor metaphorically closes the window that is making the room cold. And more often than for the rest of us, CEOs are in the final scenarios—“You’re out!” and “Ready, Aim, Fire!” The executive’s words change the world—for better or for worse.

In Example 5, the military general cannot amble into a room in Poughkeepsie and say, “Ready, Aim, Fire!” and the minister who pronounces the couple married has ensured the couple has completed necessary administrative paperwork to ensure the words do serve as actions. So too must the executive create the conditions that render her words actions themselves. What are those conditions? The totality of an executive’s career—the way she has established credibility and authenticity. Those are the conditions under which her words become action itself.

I have been involved in numerous situations where executives did not realize that, once they sit in the CEO’s chair, their words have a different mix of implied action, a new power. Their ignorance of this highly evolved word-power causes significant confusion and problems. These executives do not understand that employees take “Brrr, it’s cold in here” not as encouragement but command. The executives don’t appreciate why suppliers change their business projections solely based on the tone of the “welcome” the executives issue or that customers’ worlds change upon the baptismal words executives use in the gala launch of a new product.

The execs do not understand that the casual, conversational style that has long won them valued friends in the workplace—the same peers who perhaps helped them achieve their promotions—suddenly play a less important role in their communications . . . that they now must make much greater use of words that are action itself . . . that they have far fewer opportunities to just say things. Moving executives up the learning curve while maintaining the expression of their personality is part of the job of a good executive communications team. The specialist speechwriter’s job is to know all of this and to lead it in word and spirit.

I love the challenges and complexities of being a speechwriter. I love being the “vice president of words-as-actions,” and I think that executives’ words matter a lot to their success, the success of the companies they lead, and by extension, to our modern, global business world.