A Book Review of Proving Ground by W. David Tarver

In 1814, lawyer and poet Francis Scott Key wrote a poem that would become the national anthem of the United States. According to Key, America is the “land of the free, and the home of the brave.” Yet, freedom means different things to different people. For Key, a wealthy white slaveowner, it meant freedom from British colonialism. For the enslaved people under his power, it meant freedom from Key and his ilk. For Karl Marx, father of communism, it meant freedom from class divisions, through a state-controlled economy. And for Milton Friedman, a central influence in modern capitalist economics, it meant a free market. In all instances, freedom is the absence of structures that limit the aspirations of the people within it.

David Tarver, author of Proving Ground: A Memoir, begins his story by tracing his lineage as far back as he is able. Tarver is the great-great-great-grandson of Cassie Alexander, an enslaved Black woman born in 1824. As he follows the progress of his ancestors, and recounts the story of his own life, Tarver tells a story of Black Americans, their aspirations, and the structures that limited them.

Tarver grows up in the 1960s and early 70s in Flint, Michigan, at a time when the city remains an automotive powerhouse. Growing up in a middle-class Black neighborhood, Tarver spends time with hard-working, intelligent friends and role models. Still, he develops a consciousness around race through his interactions with schoolmates, the media, and the white people he encounters. In his adolescence, he witnesses the civil rights movement, and is both inspired by its success and crushed by the deadly forces that oppose it.

Tarver focuses his memoir on his passion for electronics, which he says is inspired by his father’s interest in radios, circuits, and other gadgets. Despite the depth of his knowledge about electronics, the senior Tarver works as a mailman, earning a modest salary and unable to change his circumstances. Witnessing the stagnant life of his father prompts Tarver to dream of one day building his own profitable electronics business. For him, this dream is about freedom—freedom from economic dependency, freedom to move to new locales, freedom to shape his own life.

The memoir is lengthy, about 450 pages, and though it’s not a complete slog, it does feel at times as though the reader is plodding through every moment of Tarver’s life alongside him. If you can get through it, though, you’ll find very good lessons about business, entrepreneurship, and life. For instance, Tarver relates many vignettes that highlight the difficulty of discrimination–it’s often unclear whether a decision is made because of bias and racism or because it is the right decision to make. His rule in this respect is a good one: “I was definitely of the opinion that people who remained quiet about injustice usually got screwed, and people who stood up for themselves might or might not get screwed,” he writes. He recounts several instances in which he needs to refer to that rule in the majority-white world of electronic engineering and business.

Perhaps the most impressive part of Tarver’s story, to me, is how in the face of ambiguous racism his patient commitment to his dream becomes a set of actualized goals. For instance, while attending the General Motors Institute, a co-op style, college-level engineering program that is tuition-free—a vital consideration for the son of a janitor from Flint–he decides to apply to MIT. It accepts him into its engineering program, and he struggles to decide whether or not to attend. He weighs the cost, the prestige, and the high status of the people who will surround him with his main question at each step in life–Does this align with my goals to start and grow an electronics business? Using that focused lens, he decides it doesn’t, and he declines the offer, opting instead to attend University of Michigan. 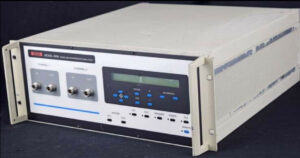 Post graduate-school, while working at the then-renowned Bell Labs research facility in New Jersey, Tarver works on teams that try and fail to develop a music synthesizer, a graphics workstation, a “Touch-Tel” system, instruments that enable remote network control, and more. At work, he comes across a basic telephone channel impairment simulator that is used by engineers to test and develop communications equipment; the product doesn’t interest Bell Labs. Tarver thinks it’s a goldmine. He’s certain he can commercialize it at an exponentially lower cost and that there’s a much larger market for such a device than Bell believes. He begins feverishly developing a more accurate, more precise device. He leaves his job, gets a bank loan, recruits two coworkers to form Telecom Analysis Systems (TAS), and completes the prototype product. Tarver then blessedly finds early “angel” customers, selling his TAS device to a few prominent research facilities in New Jersey within the year.

After adding sales and marketing capacity, Tarver grows TAS rapidly. He describes entering big sales meetings apprehensive about how he will be perceived by the white, and often foreign, customer prospects. For the most part, he learns, engineers and businesspeople, no matter where they are in the world, want a good product for a good price. They care little about what the person selling to them looks like. But, although there is equality to be found in the mutual recognition of a superior product, Tarver also receives no handouts on his growth trajectory. He has spent his entire life in the electronics world–his experience and his single-minded focus to make it as an entrepreneur is what enables him to tap a profitable market.

Toward the conclusion of the book, after selling TAS, the electronics company that he has built from the ground up, Tarver is asked to take up a new position at the multinational corporation that acquires TAS. As tempting as it is to accept, he knows he has done what he set out to do, and a position with the new parent company doesn’t align with his goals. The internal driver for Tarver, always, is the recognition of where he’s come from and where he wants to go. Ultimately, what he wants—and what he achieves–is an economic independence far beyond that of his father. “I proved,” Tarver writes in Proving Ground, “that the monumental civil rights struggle waged during my formative years made the difference between my father’s bitter frustration and my own sweet elation.” That sweet elation is the byproduct of a man accomplishing a lifelong goal of economic freedom.