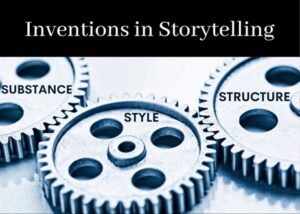 In working with business executives to help them tell stories, I encourage inventiveness. Just as there are utility, design, and plant patents (inventions), stories have three main areas where one can invent―substance, style, and structure.

SUBSTANCE is the content of the story. Are you talking about your adolescence, your home life, your workdays, big meetings? STYLE is how one tells it―the narrator, voice, word choice, and sentence structure. STRUCTURE is the way you organize the story—chronologically or by theme, set pieces that are interwoven or a series of flashbacks, etc.

I like to help executive clients become inventive in one of those areas when they tell a story so that their story has novelty and distinctiveness. This applies to any type of writing―a case study, stump speech, blog post, video script, and white paper.

I like to help executive clients become inventive in one of those areas when they tell a story so that their story has novelty and distinctiveness.

Here are general (e.g., not executive/business) examples of inventions in storytelling in the area of substance:

There are many more examples, but the point is that some storytellers are inventive in the area of SUBSTANCE. One way I’ve helped my clients be inventive in storytelling for business is to convey surprisingly transparent content about an organization; instead of holding information close to the vest, be radically transparent with profit margins or human resource struggles.

STYLE is how one tells a story―the narrator, voice, word choice, and sentence structure. It’s not the channel of distribution or the medium; rather it’s the choice of narrator, lexicon, syntax, point of view, and voice. Some executives naturally have a distinctive, even inventive, style, such as:

Examples abound of inventions in the style of storytelling. One way I helped a client invent in STYLE was to re-phrase everything the driven CEO said that was a complaint or negative into a solution or positive.

“We can’t lose ground to the competition. If we do, our profit margins will plummet” becomes “We’re going to do our best to gain on our competitors and increase our margins to the highest in the industry…” When the CEO did that over and over, his remarks became far more motivating.

If you’re writing for an executive and want to be inventive, think about inventing in the area of STYLE. For instance, you could have the executive write a blog post purely from the point of view of the customer. Or, you could have her interview customers and write a blog by her but infused with very little of her own voice.

Some executives naturally have a distinctive, even inventive, style.

Structure is the organization of the story. Do you choose to tell it chronologically, thematically, or with interwoven chronology and theme? A three-part book? A very short novella/Kindle-Singles type of thing? Maybe your main narrative consists of pictures, and your secondary narrative supports those. Perhaps you give a speech that is short and intense or, conversely, winding with lookbacks, anecdotes, and asides or out-takes?

Here are a couple inventive structures:

I love being inventive in STRUCTURE! That said, as a ghostwriter, I find it risky and exhausting to do so. First, it takes a lot of time to develop and rework a STRUCTURE. Second, my experience is that clients claim they want inventiveness, but when they see an inventive structure, they don’t know what to make of it; they look at me with pity and frustration. (I still send an invoice 😊.)

An example where I helped a client invent structure was to have the executive tell stories of people in his life/career before telling his own story. A standard storytelling structure is opposite—the executive’s story comes first, then writes about how that influenced interactions with others. So, telling stories of others and then, at the end of book, switching to his-narration-and-his-story jolted readers (in a good way).

“Oh,” they realized, “that explains why the story in Chapter One ended how it did; he was about. to get fired by his own boss.” Readers realized, in the later “reveal” about his own life, that they only had one part of the story. With the new info, they could reconsider the earlier stories.

Examples abound of inventive STRUCTURE in storytelling. If you’re writing for an executive and want to be inventive, think about inventing in the area of structure. Perhaps create a website with the equivalent of a “reverse chronology,” where Contact Us is the first and most prominent tab.

I love being inventive in STRUCTURE! That said, as a ghostwriter, I find it risky and exhausting to do so.

Point is SUBSTANCE, STYLE, and STRUCTURE interact and complement each other in wonderful ways that ultimately form the art, science, and inventiveness of storytelling. I never tell executive clients that I am thinking about their content in terms of substance, style, and structure because they don’t care how the sausage gets made. But when I ask questions to determine strategy for a speech, book, presentation, or other communication, I am always thinking about these building blocks.