People sometimes ask me what big themes I’ve hit on from ghostwriting many books, articles, speeches, and scripts for business executives over 15 years. In fact, across 20+ books and 500+ speeches and articles and scrips, I’ve only noticed about three clear, major themes. 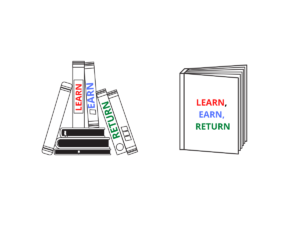 One theme relates to the “Learn. Earn. Return Cycle.” What I’ve clearly seen is that prior generations of executives really bought into “Learn. Earn. Return.” as a sequence. In other words, you spend the first part of your life learning, the next part earning, and the last part returning your knowledge and resources to society through philanthropy.

“Learn. Earn. Return.” as a life sequence was vital to my clients’ identity and moral code in life and work. (I should add that many older executives have also felt they gave so much by serving in wars-WWII, Vietnam-that they feel they front-loaded the return part and just wanted to get back to the straightforward simplicity of earning.)

Modern executives view “Learn. Earn. Return.” as simultaneous. These simultaneous actions/behaviors/values are important to their sense of morality. In fact, making “Learn. Earn. Return.” sequential borders on being ethically wrong. For instance, being a good corporate executive means you should engage in lifelong learning (and development). And of course, executives should, with their products, services, and in their communities, always be both earning and returning.

The generational switch from considering “Learn. Earn. Return.” to be simultaneous instead of sequential is a clear theme I’ve taken away. It’s core to many executives’ identity and satisfaction.

Men and Women as Storytellers 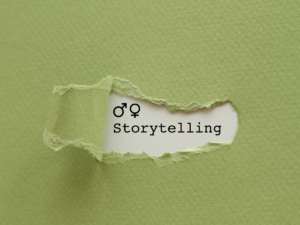 Another clear theme I’ve noticed in ghostwriting for executives for years is how men vs. women tell stories. When I interview males, they tend to tell stories as a series of actions. “I did this, a person responded, then this happened . . .” Of course, to write well, I want to record how they felt about these events; emotions are the glue of a story’s construction. When I ask, they go blank–it’s funny. “How did I feel?” They may dismiss or ignore the question. But it’s important in stories to capture feelings, even if briefly and understatedly. I get them eventually to say how they felt.

When I interview females, they tend to tell stories as a series of emotions. “I was psyched about this, then frustrated about that . . .” I ask them what they did before when they had these feelings or to cause these feelings. Often there’s a pause, but since business is an action and emotional adventure, I ask them to say what they did: “I hired someone, set up a new office . . .” Most interestingly (to me), I find the core list of actions and feelings is nearly the same for males and females. But they tell stories from the core list of actions and feelings differently.

I didn’t go into ghostwriting for executives with any notion of how they tell stories. I’ve never studied male versus female storytelling at all. My total ignorance is why about ten years into this gig, I found it to be an “A-Ha!”

It’s important in stories to capture emotions, even if briefly and understatedly. 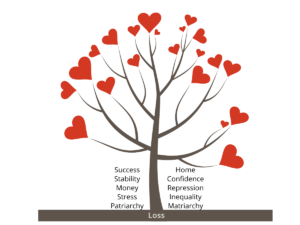 The third and final theme I’ve found in ghostwriting memoirs (and speeches, etc.) for executives is that for many generations American business success relied on the clear structure of being a patriarchy at work and a matriarchy at home.

In interviewing the wives of older executives, I notice how palpably strong they are—not cliché, or halcyon, strong; an indescribable strength that comes from excelling at what they do and knowing it. They excelled at running and operating a household, managing a family with an absent adult male (the executives were consumed with career advancement), serving as full-time nurturers, and achieving financial success vicariously through their husbands.

Being consistently in the presence of this structured feminine strength felt different than I had imagined. I had thought I would feel these wives-and-mothers’:

—Anger, that they had been required to serve in said roles

—Anxiety that they had to accomplish their financial ambitions through their executive husbands, and

—Sadness, that they never had access to the experiences of a rich executive life.

I was raised, in my family and business life, in a place and time that communicated the notion that ambitious women have anger about being shut out from executive life and being forced into their only choice, the household matriarch role. Amending that line of reasoning with some nuance could perilously dilute the big, important idea of female economic empowerment. So, the difference between what I tacitly believed I would sense in interviews versus what I actually sensed, and strongly so, struck me hard. Where I thought I’d feel anger, repression, and resentment, instead I felt a beautiful, contagious confidence in their skills and leadership in the (executive) home.

In these male executives’ eras, society repressed women economically and professionally. I’m a committed advocate of women as business leaders. But societal change always has a good-news/bad-news thing. What I felt as a theme, very tangibly, in these interviews was the good news—society has gained more women as executives (albeit slowly)—and bad news-society has lost (writ large) a reliably beautiful, contagious, palpable confidence in homemaking.

I’m a fan of proceeding intentionally through all the stages of grief. In our eagerness to celebrate gains (again, even if slow) in executive life for women, maybe we’ve suppressed important stages of grief about losses that have also accrued?

Being consistently in the presence of this structured feminine strength felt different than I had imagined.